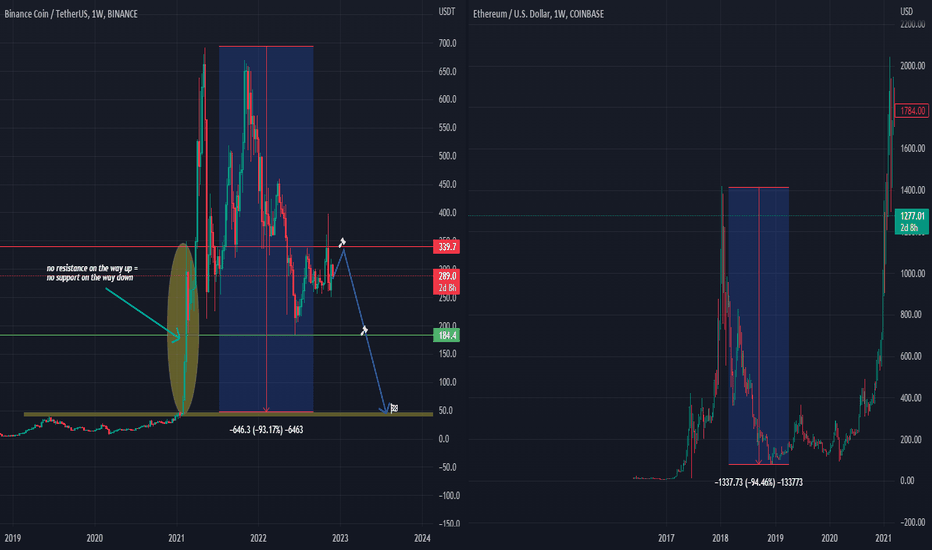 First of all, we would like to apologize if you are BNB bull and this trading idea made you shaking or you already have a panic attack. But let's be honest now! BNB pumped like crazy and didn't give it back yet in the current bear market. Is it impossible for BNB to drop to $45 area? Probably no. It would be 93 % drop. In 2019 bear market ETH dumped over 94 %. In the current bear market there's a lot of FUDs around. We already saw FTX collapse, rumors about crypto.com insolvency and many more. It looks that CEXes are in trouble . Perhaps we will see more FUDs regarding Binance and it would be a trigger for BNB price to dump heavily? We believe that if BNB breaks down below 184$ and there are more / new FUDs around, the price may drop to 45$ again. There's literally no support anywhere between. Many won't like this trading idea, but it is what it is. Probably it will take some time to drop so low, but if the bear market for risk on assets were to continue , it will happen sooner or later. From another hand we expect Binance to be a leader amongs crypto exchanges therefore $45 would be a golden opportunity for a long-term investment. 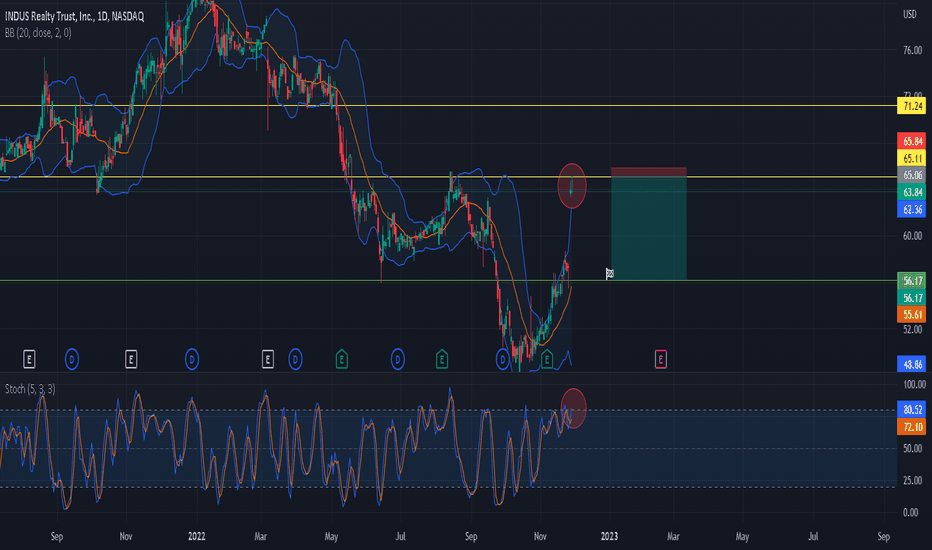 What we can see on the chart is that the price of the stock is overbought. The price is above the upper Bollinger Band , and also the stochastic shows us overbought conditions (above 80). The price currently is at the resistance, therefore it would be the entry for the short position. Stop loss and target are shown on the chart. 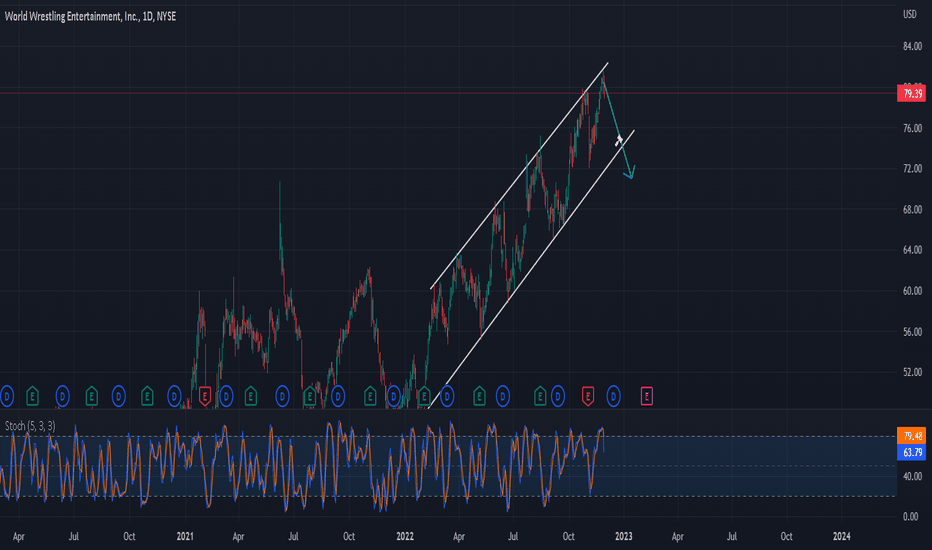 What we can see on the chart is a strong resistance and a support level that have been tested multiple times before. The lines are forming an upwards channel. The price hit the resistance, so we are expecting that the price will go down. The stochastic was overbought the previous days, now it is pointing downwards. How to trade: Enter the short position only when/if the price breaks down out of the rising channel . Do not forget the stop loss to protect your capital. 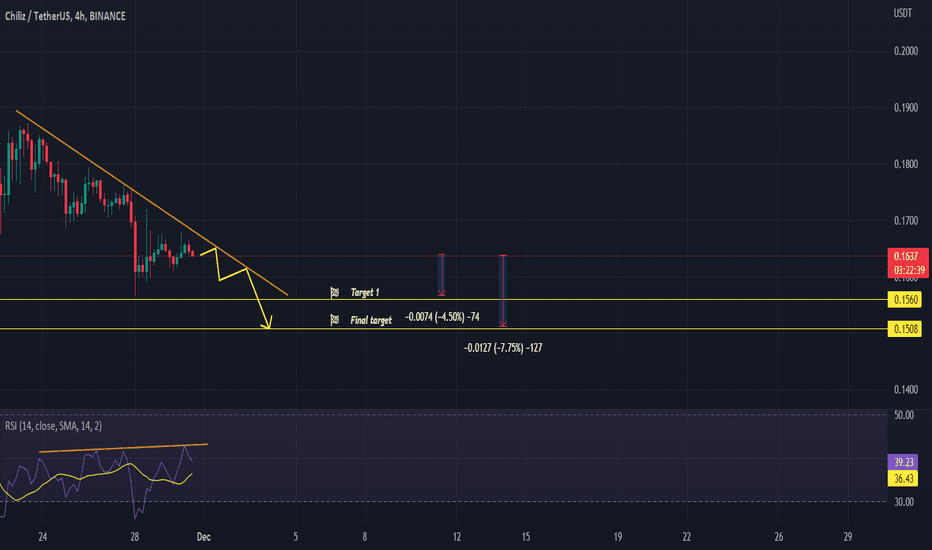 Hello Hello Trader , Please if you like the ideas , don't forget to support them with likes and comments. Thank you very much. Here we go , I want to tell you about the CHZ-USDT hidden bearish dívergence. On this chart , We can see, while the price is going down, the RSI is moving up. This is called bearish divergence. So it's likely for the price to continue going lower on a short-term basis. All further details are shown on the chart. Goodluck! 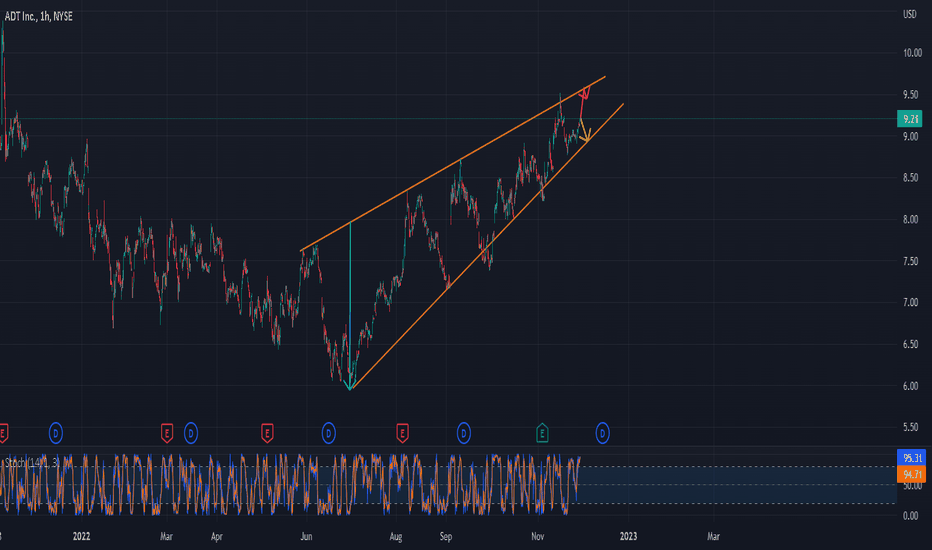 What we can see on the chart is a rising wedge pattern. The price did not break out of the pattern yet. We are expecting that the price will break down and continue the previous downtrend. The stochastic shows us that the price is overbought but it is not pointing downwards yet. How to trade: Enter the short position only if/when the price breaks down out of the wedge with the volume increase which would be the confirmation. Do not forget about the stop loss to protect your capital. 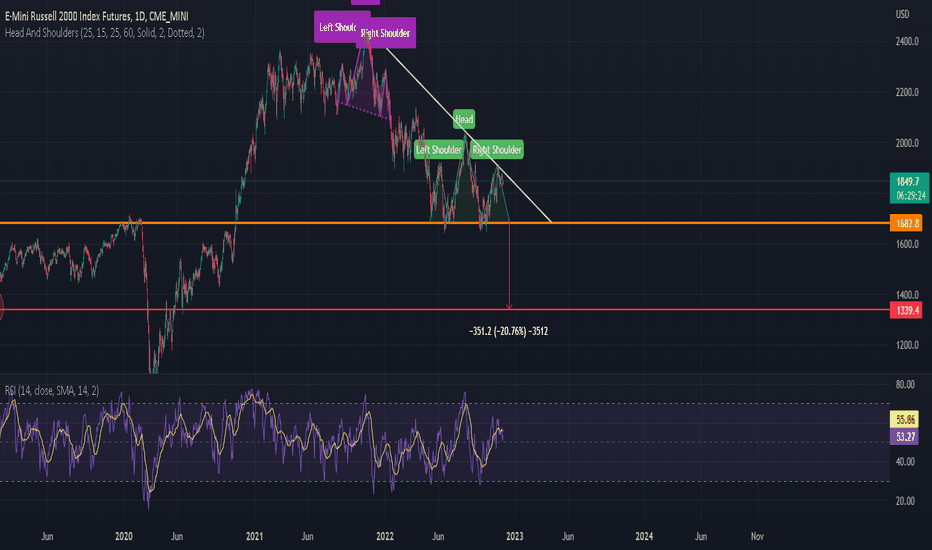 After another head and shoulder that broke to the downside, we find a similar pattern playing out. As the RSI is pointing down whilst there is a downtrend in play, we are looking for the head and shoulders to be completed and break down. The next target corresponds with the previous supports of dec. 2018 and aug. 2017. 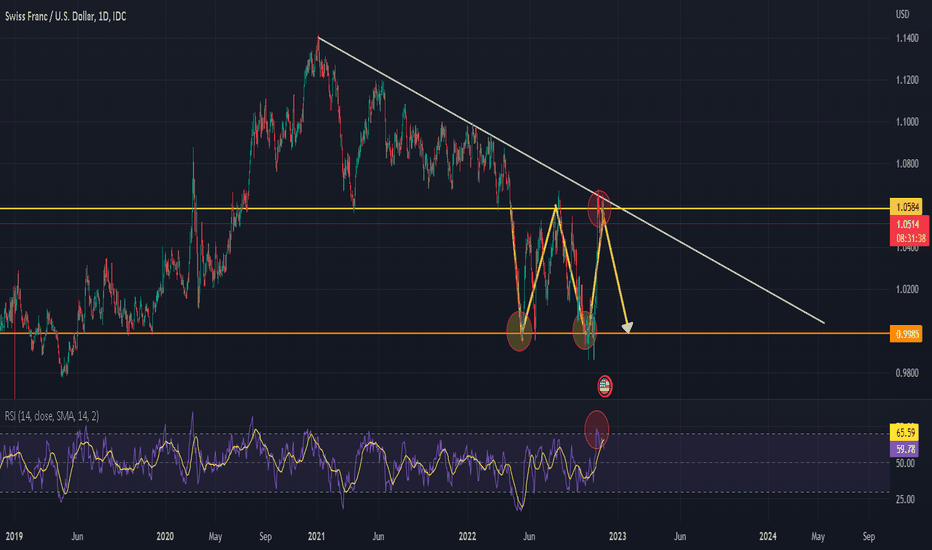 Although the swiss franc is seen as a safe haven vs inflation , due to the global turbulence it might go down vs the USD. USD is expected to get stronger in the coming weeks, and while the RSI is on the way down together with a bounce off the resistance line, we aim to go down towards parity. 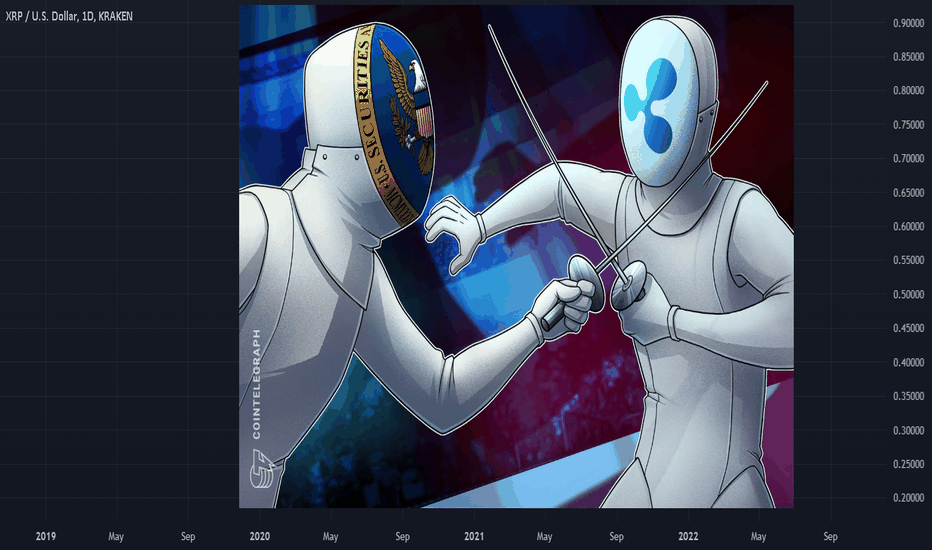 The Howey Test The Howey Test is a legal test to assess whether certain transactions are investment contracts. If a transaction is an investment contract, it can be considered a security by the SEC. It is subject to specific disclosure and registration obligations under federal securities laws. The test got its name after the 1946 Supreme Court decision in SEC v. W. J. Howey Co., 328 U.S. 293 (1946). So, in this the Court defined an investment contract. Since then, courts throughout the United States have employed the Howey Test. This to evaluate whether a specific transaction qualifies as an investment contract. If so, it will then be handled as a security. In fact, the Securities and Exchange Commission (SEC) has long used the Howey test. In its most basic form, the Howey test requires that a transaction involve the following: (1) an investment of money (2) in a common enterprise (3) with an expectation of profits predominantly from the efforts of others. Digital assets Cryptocurrencies, digital or virtual tokens that use cryptography for security, have garnered much attention recently for their potential to take on fiat currencies. Their legal classification, however, has been unclear. For example, in the United States, the Securities and Exchange Commission (SEC) has been struggling to determine whether cryptocurrencies are securities. On June 14 in 2018, the SEC finally released its long-awaited report on The DAO, a decentralized autonomous organization that had raised over $150 million in a token sale. The SEC’s report stated that cryptocurrencies can be securities and that The DAO was an illegal security offering. Actually, the digital asset space is emerging and constantly changing. A digital asset is a unit of value created and managed by its creators that may be exchanged on an online marketplace. As a result, they are subject to the same rules as conventional securities. However, in many places, the legitimacy of digital assets is still being contested. Digital assets are frequently regarded as securities. This is primarily due to the fact that digital assets are frequently used to raise finance for a company. According to the Securities and Exchange Commission (SEC), digital assets may constitute securities. As a result, digital assets could be subject to federal securities regulations. Moreover, regulatory agencies are struggling to adapt to the rise in digital assets. These agencies must answer the question of whether digital assets should be seen as securities. Yet, the majority of digital assets are currently not registered with the SEC, which raises the question of whether the SEC has the authority to regulate digital assets. Ripple One company that the SEC has been investigating is Ripple, the company behind the cryptocurrency XRP. Ripple is facing a lawsuit from the SEC which alleges that it violated securities laws by selling $1.3 billion worth of XRP tokens. The SEC is seeking to determine whether Ripple’s XRP token is a security. So, the outcome of this case will likely have a significant impact on the cryptocurrency industry as a whole. Furthermore, the SEC settles the majority of its lawsuits rather than going to trial. Individual cryptocurrency enterprises must comply with SEC orders and pay penalties in order to be released. Ripple, unlike many others, went all the way and participated in a legal brawl. Ripple has particularly referenced some of the SEC members' connections to other crypto platforms, specifically Ethereum . While there is no proof of these connections at this time, the commission gave Ethereum a pass on securities legislation. They claim that it operates in a decentralized manner while using XRP. This seems very fishy. As a result, Ripple perceived the SEC as prejudiced in its application of the security concept to virtual currencies such as XRP. However, Ripple's lawyers stated that the SEC never warned or notified the company. Also, Ripple wasn’t advised that XRP could be categorized as a security, according to the US regulator. Conclusion It is still unclear who will end up winning. For now, the assumption is that the final date will be somewhere in March 2023. The thing that matters is that the results will affect the crypto market in one way or the other. Therefore, for the benefit of the whole crypto industry, it is important for Ripple to get away with a win. 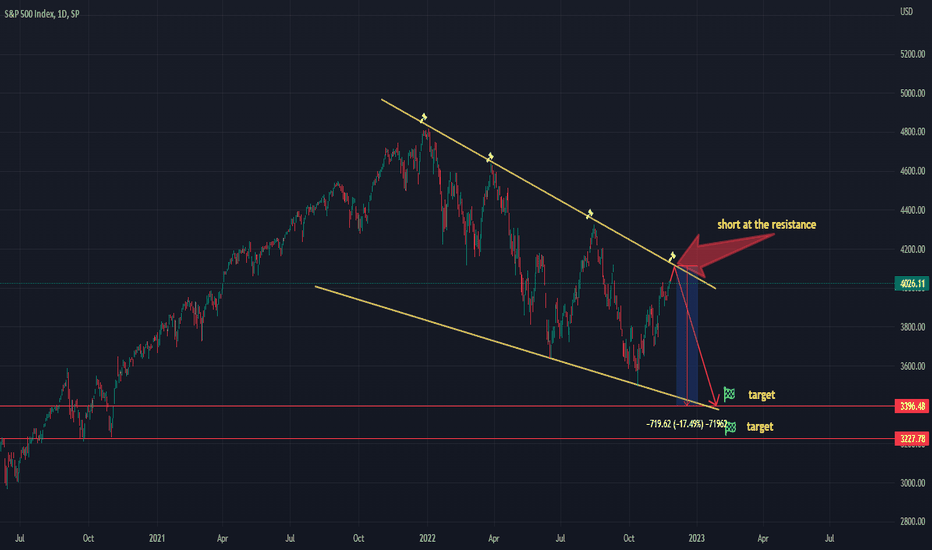 SPX approaching a downsloping resistance. It may fakeout above the trendline to trick traders but don't get it twisted. This bear market rally is almost done and it's a time for a major move. Lower high after lower high is suggesting downtrend continuation. Are you ready for a 17 % dump? If you are not ready, this is a friendly reminder that it may be a right time to close your longs and enter shorts or stay on the sideline. It may take some time so be patient! Good luck! 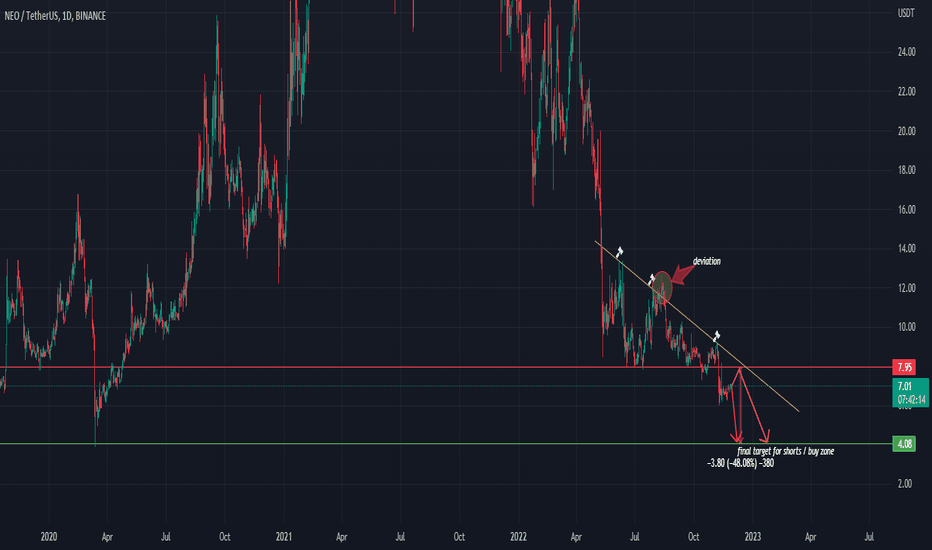 NEOUSDT looks very similar to BCHUSDT chart. Actually many dino coins from 2017 looks like this. As the bear market continues , the price can't break the downsloping resistance and it remains in the downtrend. We can see that the price created a deviation but right after that it came back down below the downsloping resistance trendline. We expect a huge dump before any significant bounce. If it happens NEO would reach close to $4 which are lows from March 2020. It also likely that we will see price lower than this if the bear market continues. Any bounce probably will be a short lifted and the price eventually will go down. On the chart you can see 2 possible scenarios how the price would drop towards $4. Good luck