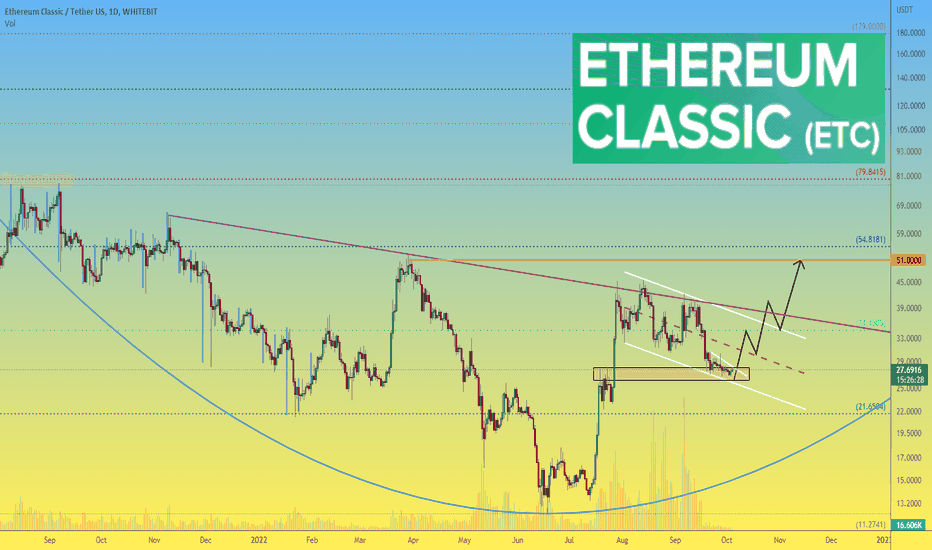 ETHEREUM Classic has many miners, they will pump ETC price again The fall in the ETHEREUM Classic price is happening on lower volumes. A modest update of the lows and something like a downward wedge is formed within the correction. Usually such a pattern later acts as a continuation of the growth trend. We think that in the area of $26-28 it is logical to try to take the longs of the ETCUSDT . Sooner or later the ETC price will be pumping again, and the minimum growth potential in the medium term is x2 to the area of 51dollars. _____________________ Did you like our analysis? Leave a comment, like, and follow to get more 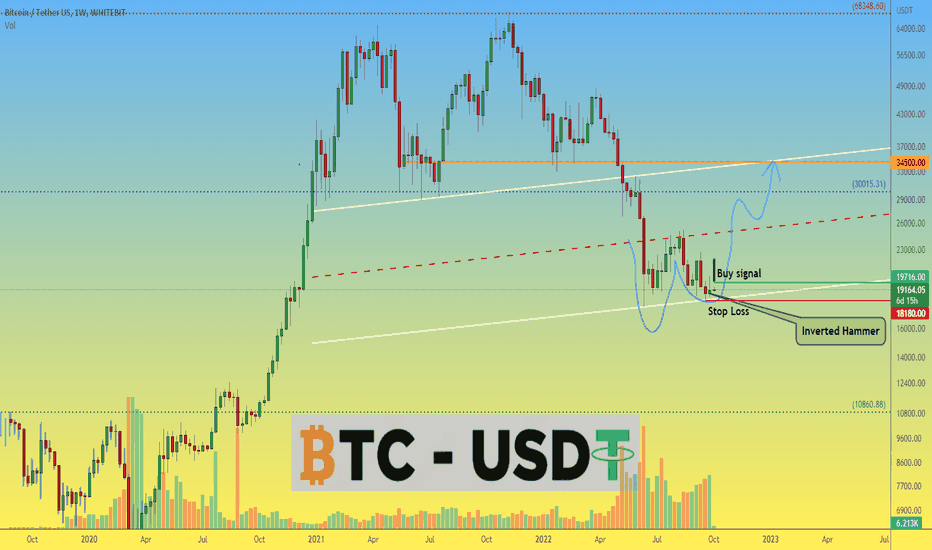 "Inverted hammer" appeared on BITCOIN chart what does this mean? The previous trading week on the chart BTCUSDT closed presumably with a candle: Inverted Hammer This Japanese candlestick pattern consists of a bearish candle (red), followed by the Inverted Hammer candlestick , which is characterized by a short body, long upper shadow, and almost without lower shadow. Its appearance on the chart completes the downtrend and signals a bullish reversal. Inverted hammer pattern criteria For the reliable identification of the inverted hammer , the following criteria should be met on the chart: - The market should be dominated by a pronounced downtrend, which can be clearly identified on the chart. - The first candle of the pattern should be a bearish candle with a long body (relative to the average length of the body of the previous candles). During the next candle forms an inverted hammer candle, which has a relatively short body length, located in the upper part of the trading range. It does not matter whether it will be bullish (green) or bearish (red) - The upper shadow of the second candle should be at least twice as long as its body. - Ideally, the lower shadow should be completely absent, but in the practice of analysis, it is acceptable, if its length is insignificant. Signal confirmation The inverted hammer bullish reversal pattern should definitely get the final confirmation in the form of: - a bullish candle with a long body, provided that the trading volume is high; - price break upwards with the formation of a bullish candle. That is why, the BTC price should rise at least to $21.5-22k in the current trading week, as we show in the chart Psychological rationale The formation of the model occurs against the background of a steady downtrend, and the bearish candle with a long body just confirms the domination of the bears in the market. The next trading candlestick opens at or near the price low. During this trading candle, the bulls take the initiative, which creates a long upper shadow, but when the candle was closed the bears regain the lost positions. Further action by market participants will depend on the final confirmation, which will be received or not received on the next trading candle. If the market gets a clear confirmation of the trend reversal, the bears will begin to close short positions, and the bulls will increase pressure on the market, and the price will naturally accelerate growth. Buy and Stop Loss levels The model is considered to be confirmed if the price has crossed the level passing through the middle of the upper shadow of the inverted hammer , in our case the Buy signal will be if the Bitcoin price fixed above $19716 Stop Loss level is defined as passing through the lowest of the last two price lows, i.e. below $18180. Close a long position and fix the loss in the case, if the market has closed and consolidated below this level. _____________________ Did you like our analysis? Leave a comment, like, and follow to get more 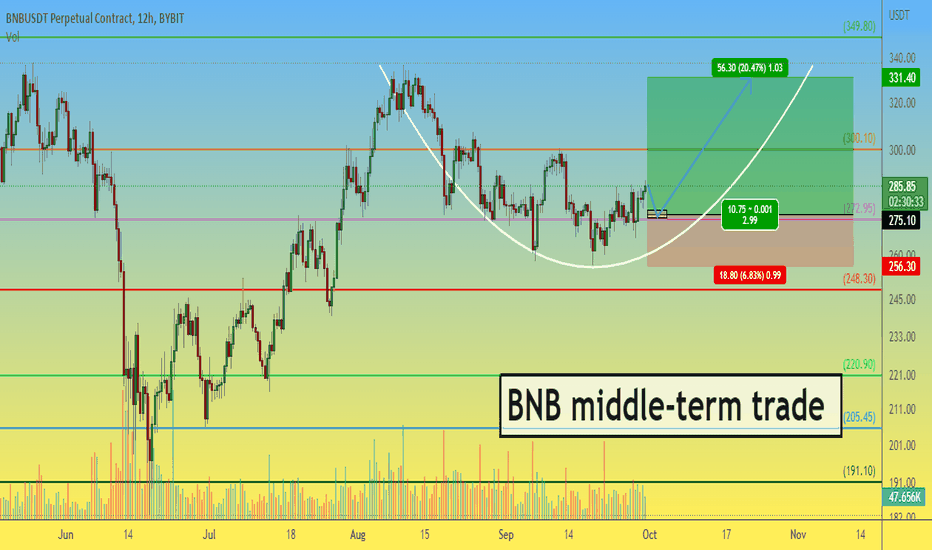 BNB middle-term trade, good entry point on this weekend The BNBUSDT price is behaving well, BNB buyers show that they are in control of the situation on the market, and the price itself is 30% above the minimum, which was set in June 2022. Such a combination of facts taken from the BNBUSDT price chart provides good conditions for placing an order to enter a long position under the following conditions: Entry $273,4 - 276,6 Stop $256,3 Take profit $331,4 (+20,5%) P/L ratio 3/1 By the way, the trade that we published last weekend received a very accurate entry into a long position of BTCUSDT and is now in the process of being worked out _____________________ Did you like our analysis? Leave a comment, like, and follow to get more 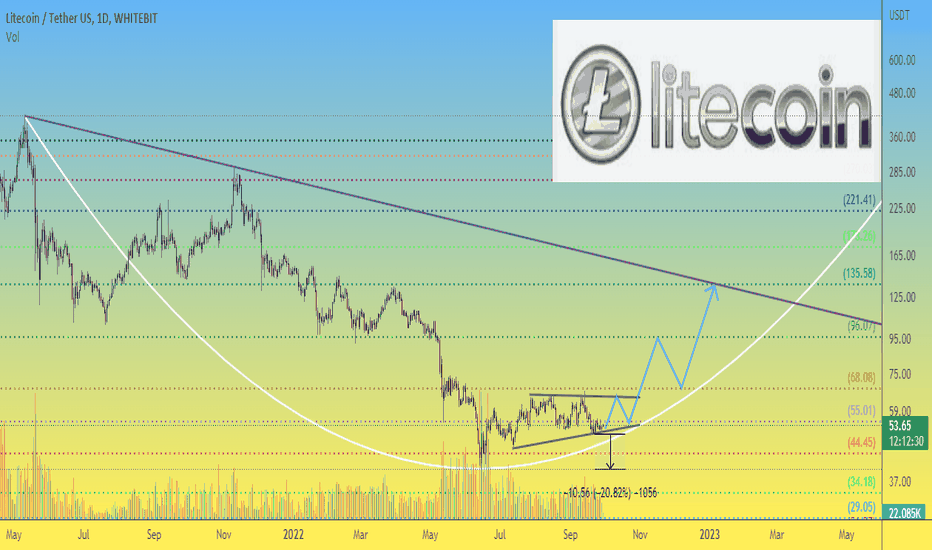 LITECOIN LTC price may double as early as the end of 2022 While the BTCUSDT price was close to renewing the 2022 low, the LTCUSDT price stopped its decline 20% above the June 2022 low. Looking at the trading chart of the LTC price, it can be assumed that there is now an accumulation of a long position in the range of 50-65 dollars. The result of such accumulation can be a shot of the Litecoin price to at least $96, and in the best result to $136 _____________________ Did you like our analysis? Leave a comment, like, and follow to get more 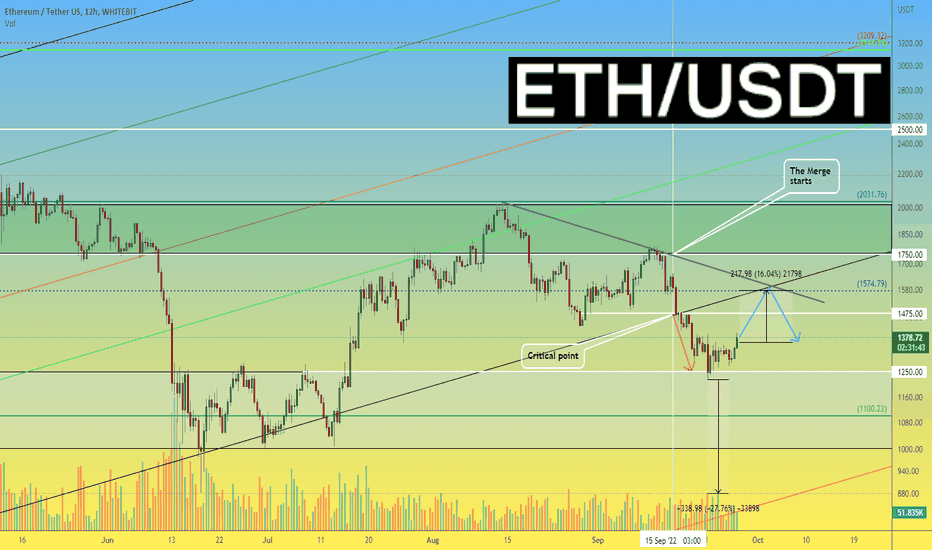 We expect growth in the coming days ETHEREUM ETH price Almost two weeks have passed since the transition of the Ethereum from POW to POS What did we get? Movement along the red route from our previous idea, as well as: - reduction of mining of new coins by -86-90% - falling ETH price A little illogically. The prospect of a decrease in the supply of Ether on the market should have provoked a strong increase in the ETHUSD price It is possible that the trading strategy of large deposits is currently being restructured, taking into account the new minting data of new ETH. And in the future the ETHUSDT price will resume its growth. However, the truth will be that the launch of the MERGE coincided with, how we hope, "final fall" of the crypto market in 2022. And while the BTCUSDT price was close to updating the minimum of 2022, the ETH price stopped at 27% above the June minimum. Ok, in the coming days, we expect the ETHUSDT price to rise to $1575. There is a crossing of several critical levels, so a correction from there will be very likely. _____________________ Did you like our analysis? Leave a comment, like, and follow to get more 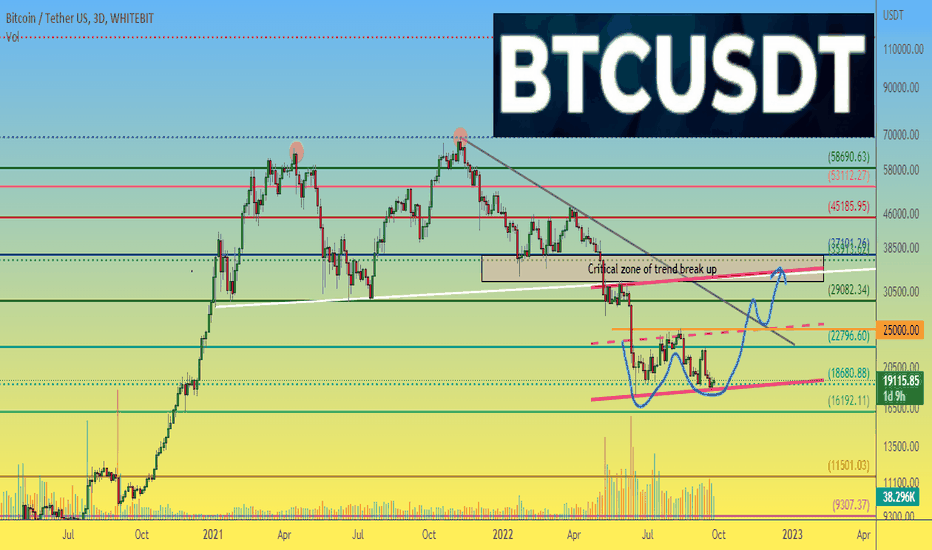 BITCOIN BTC price forms "Double bottom" before the growth start We want to believe that a "Double bottom" or an "Adam and Eve" pattern is forming on the Bitcoin price chart By the way, how this pattern works was clearly demonstrated by the XRPUSDT price. So, the BTCUSDT price is at a conditional day now, and I want to believe that October will be a month of growth. The intermediate goal of working out the "Double bottom" pattern is $29,000 The global goal of growth within the scope of working out this pattern is $34-36k Below $18,000 there is emptiness, there is no liquidity, and accordingly a fall to at least $12,000 very possible. The most alarming thing is not the possibility of the fall of the crypto market itself, but the fact that very, very many small and medium-sized participants of the crypto market are waiting precisely for a fall to $12,000, and not for growth. But the realities are such that the minority earns on the crypto market, and the majority loses. Well, time will tell everyone..., we realized our thoughts on the market by trading with compliance with risk management under the following conditions: _____________________ Did you like our analysis? Leave a comment, like, and follow to get more 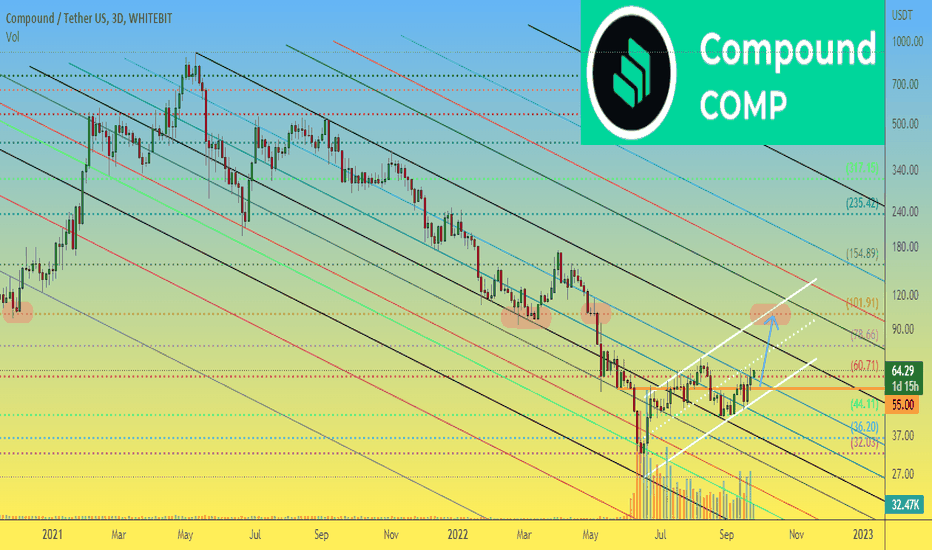 COMPOUND COMP price ready for x2 growth? Today, we liked the Compusdt trading pair on global 3 days chart. It has not been analyzed for a long time, but now I liked that the Compusd price is moving in its own way, despite the maneuvers of the BTCusdt price. In general, Compound Protocol is in the top 10 in terms of volumes of blocked resources ( TVL ) in DeFi protocols Perhaps the individual behavior of the Compound price is somehow affected by this news: "DeFi project Compound has launched a lending service for institutional investors" Or maybe something more interesting is being prepared in the project, which we will find out after the COMP price shoots up) Summing up: while the COMP price is above $55, there is a good chance for x2 growth to the $100 area, where there is a strong liquidity zone. _____________________ Did you like our analysis? Leave a comment, like, and follow to get more 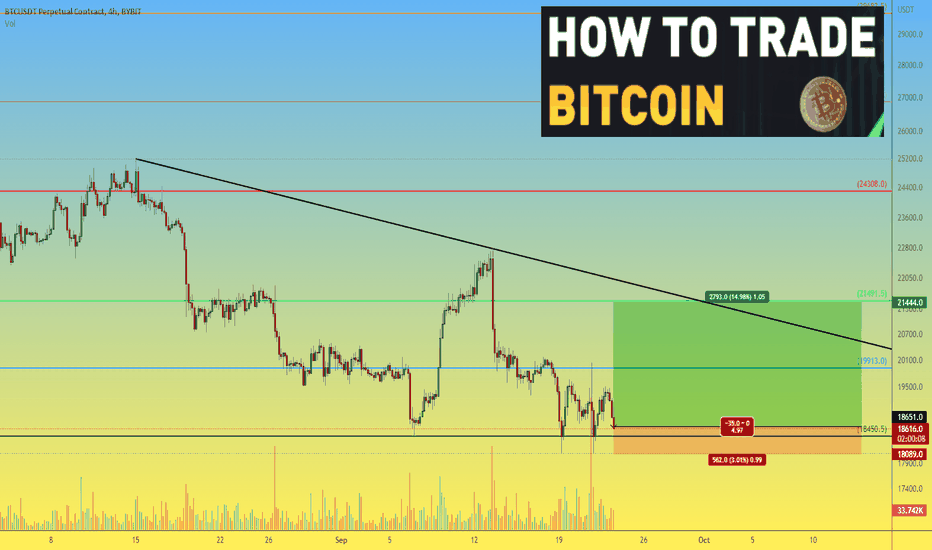 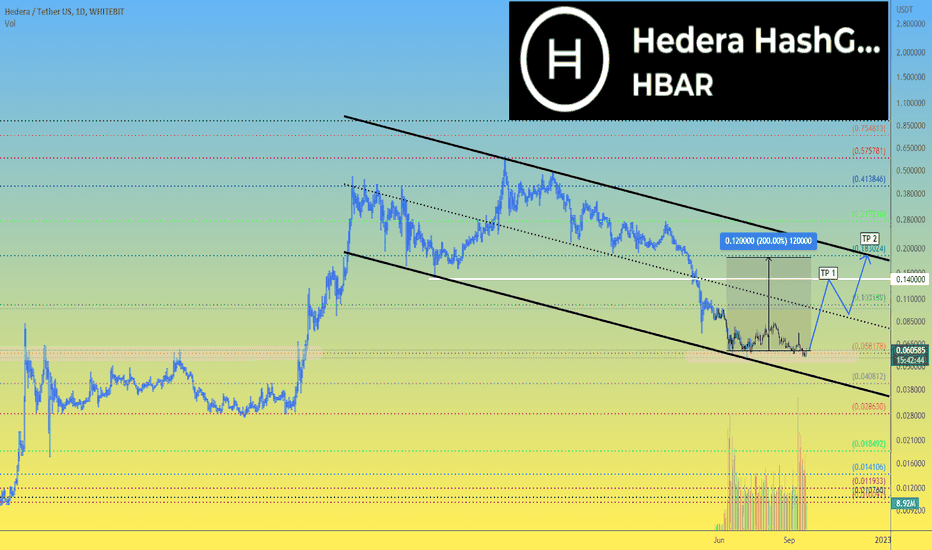 HEDERA HBAR price can growth +200% Today we look at a global chart of the HEDERA price movement The HBARUSDT price has been trading for the past 3 months above a strong mirror level of around $0.06. Previously, this level acted as a strong resistance that did not let the price grow throughout 2020, but now it acts as a support that does not allow the price to fall below. Our assumption is that the HBAR price has a good chance to grow in value by +200% even before the end of 2022. In general, two levels of $0.14 and $0.18 can be identified, where there will be HBAR sales and, accordingly, it is worth fixing profits on longs. _____________________ Did you like our analysis? Leave a comment, like, and follow to get more 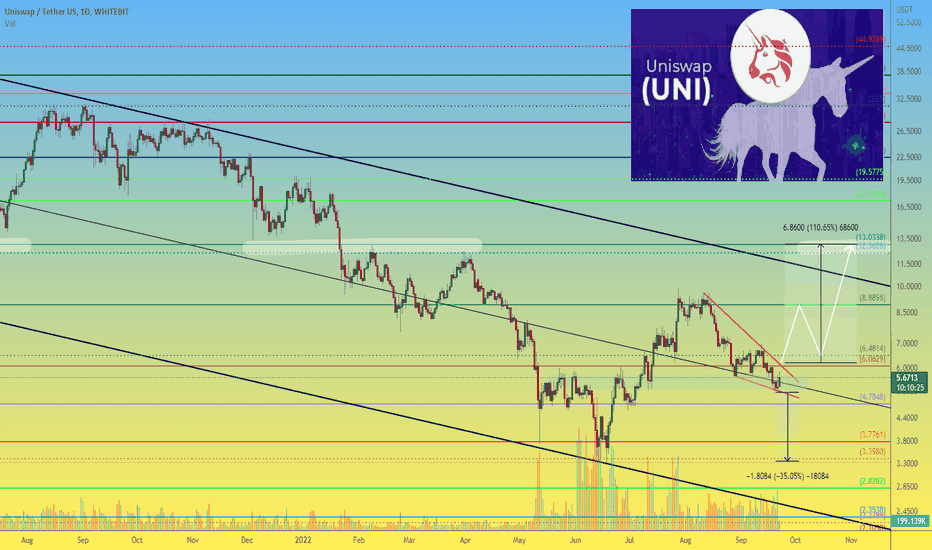 Uniswap UNI trying to develop a growth trend Yesterday, when the Bitcoin price was thinking go to new bottom or not, the UNI price stopped at +35% above the June 2022 minimum. At the same time, yesterday's decline in the Uniswap token price stopped in a strong liquid zone. In parallel, "a bullish wedge" pattern is formed, which often acts as a continuation of the growth trend. Safe long after breaking the wedge up, above $6.20 The first goal for growth is in the area of 9 dollars The global target for growth is in the range of $12.5-13 _____________________ Did you like our analysis? Leave a comment, like, and follow to get more